Hair loss can often have a significant negative impact on oneâs life. Many factors play a role, including diminished self-esteem, reduced self-image, and even a loss of self-identity. In a recent survey, researchers found that 84% of the balding men were preoccupied with their hair loss. These men complained of being filled with self-consciousness, helplessness, and an envy of men with full heads of hair. In a separate study, 69% of males with a high degree of hair loss spent a large portion of time looking at their hair in the mirror; 78% were self-conscious about their hair loss; 56% were worried that others will notice; and 51% felt less attractive because of their hair loss.

An average human body contains roughly five million hairs, with 100,000-150,000 being on the scalp. Hair follicles are all generated before birth, and remain constant throughout life. Not all follicles become active, and some lose their hair production capacity through time. Active follicles normally go through a life cycle which includes a growth phase, followed by a transitional phase, and then a resting phase. These cycles can be as long as five years and come to an end when the hairs are actively shed. Shedding of anywhere from 50 to 150 hairs per day is normal. Unfortunately, in many people some of the hairs do not grow as long or as thick as did in previous cycles. An estimated 40% of males lose hair to some extent by the age of 35. 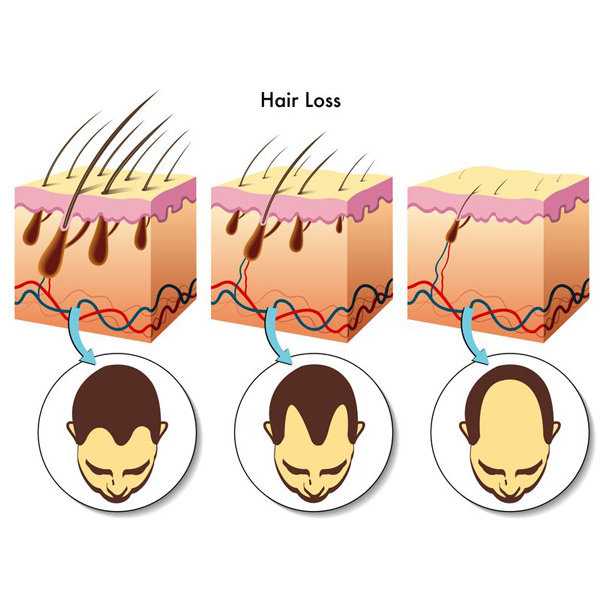 MPB usually starts at the temples, where the hair gradually recedes to form the shape of an âMâ. This hair often becomes finer and does not grow as long as it once did. Next, the hair on the crown of the head begins to thin out and eventually the top points of the “M” meet the thin spot the crown. Over time, a horse-shoe pattern of hair around the sides of the head develops. The remaining hairs in the balding areas usually become finer and grow at a slower rate. Since this type of baldness is largely hereditary, a man can often predict the extent of his future baldness by examining family portraits. Roughly 50% of children with a balding parent of either sex will inherit the dominant baldness gene and eventually display similar characteristics.

FPB usually becomes noticeable around the age of 40, and may progress rapidly after menopause. Female hair loss is often a more generalized thinning, and not contained to an isolated spot on top of the head. Studies show roughly 20 million American women have this type of hair loss. Similar to males, hair follicles simply shut down, with hormones playing some role in the process.

Hair loss occurs when the rate of shedding is greater than the rate of regrowth. In pattern baldness, the rate of shedding is increased because of an inherited predisposition of the hair follicles on the top of the head to be effected by the hormone dihydrotestosterone (DHT). DHT is an activated form of the hormone testosterone and both hormones are naturally occurring. Over time, the action of DHT causes the hair follicle to degrade and shortens the growth phase of the life cycle. As time passes, the follicles shrink in size, a process is known as miniaturization. Some follicles will gradually die, but most will simply shrink to the size they were when you were born and produce hair similar to that of a baby. With a steadily shortening growth phase, more hairs are shed, and balding becomes noticeable as the scalp becomes visible through the hair. Balding hair gradually changes from long, thick, coarse, pigmented hair into fine, unpigmented sprouts. 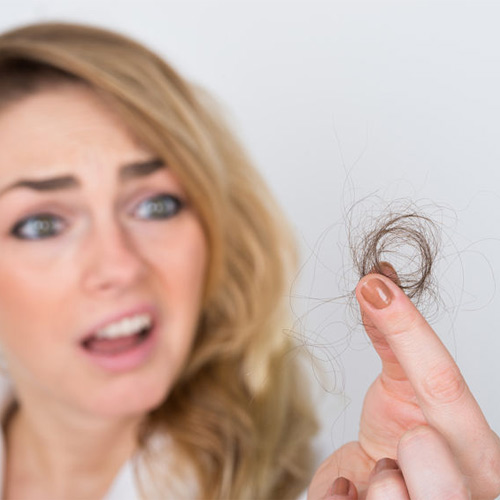 Lastly, while pattern baldness is far and away the leading cause of thinning hair, there are other conditions which cause hair loss. Alopecia Areata, generally thought to be an autoimmune disorder, can cause patchy circular areas of hair loss. More advanced forms of Alopecia Areata called Alopecia Totalis and Alopecia Universalis, are characterized by total hair loss on the scalp and entire body, respectively. Traction Alopecia is hair loss as the result of continuous tension of the hair and is seen with prolonged use of hair weaving, corn rows, etc. This can result in permanent hair loss. On the other hand, a type of hair loss which is usually temporary, Telogen Effluvium, is sometimes caused by physical and emotional stressors. Thinning hair can also be seen as a side effect of many over-the-counter and prescription drugs, as well as various hormonal imbalances.